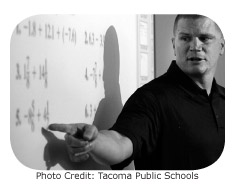 For 16 years Jon Kitna was making an impact on Sunday and Monday afternoons playing for NFL teams such as the Cincinnati Bengals, the Detroit Lions, or our very own Seattle Seahawks. As a professional football player, thousands of young people looked up to Jon; daydreaming of becoming like him each time he took the field. By modern standards Jon was a success, having all the good things this life could afford. Yet Jon has something else far greater than a professional football career. Jon has the Lord Jesus Christ, whom he believes is a treasure far beyond any other.


Teaching was my avenue to have an impact on young men and women. That’s always what my wife and I dreamed about.
Though his professional football career is now behind him, he remains a man who has incredible impact on the lives of young people as a teacher and coach at Lincoln High School, in Tacoma, Washington.  Although his fame was what many young men dream about, Jon’s dreams were not necessarily fulfilled on the football field, but in the classroom.

Jon came to Christ in college. His journey in the NFL shaped his perspectives: “I saw a lot of men at a young age that didn’t learn character and integrity and what it means to be real. When they left the NFL their lives fell apart.” Jon further shares on reaching some of the hardest to reach: “You can’t come here and be fake. I just try to be as authentic and real as I can with them day in and day out.”

Jon Kitna’s impact in the lives of young people is what every staff member at NWC seeks to emulate on a daily basis. Though none of us are professional athletes, we have the same source of strength as Jon to accomplish great things for the Kingdom of God.  We, along with Jon, want to be used by God as He transforms young people into His likeness.

Join us for IMPACT NWC 2014
Please pray for Jon as he is used by God at Lincoln High School.  Pray that as Jon comes to speak at IMPACT NWC 2014 on November 1st, it would truly be an evening that encourages our entire school family as we seek to be used by God for His glory.

Other Quotes by Jon Kitna
“To impact community, country, world it starts with one life that’s committed to doing the right thing. Hopefully that means that person is committed to loving Christ.”

“You want to make a difference in somebody’s life, start serving. Once you do that, you get to see God at work. God’s serving.”