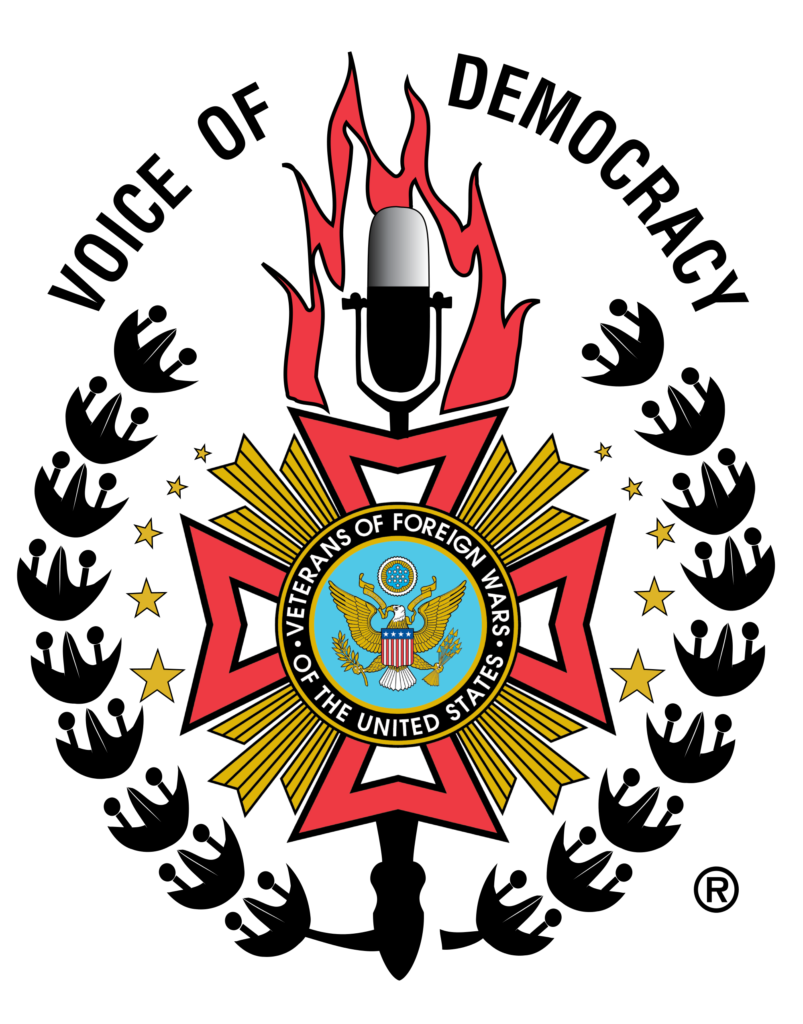 Congratulations to Northwest Christian Senior, Noah Hilderbrand, on his 6th place in the nation finish in the yearly Voice of Democracy competition, hosted by the VFW.

The Voice of Democracy competition started in 1941 and is a broadcasting competition.  When the judges evaluate the entries, they only hear a recording, they do not see the printed version of the essay. More than 40,000 high school students addressed this year’s prompt, “Why My Vote Matters”.

On January 12th, Noah traveled to Yakima and competed against 250 other entries, coming out on top!  This meant a trip to Yakima for a convention to honor the 13 district winners and announce the State winner.  Noah was announced winner of the State competition! He received incredible support from the VFW 51, as well as a generous scholarship.

On March 2nd, Noah was sent to Washington DC by the VFW for the national competition. Noah placed 6th in the nation and was the recipient of $5,400 in scholarships, a new laptop and a trip to Washington DC. In June, Noah will take part in a 4 day leadership conference in Philadelphia as one of the top winners. To read Noah’s outstanding essay, click here.

Congratulations, Noah, on this outstanding achievement!

In Memory of Mark Dresback, Class of 1977

Mark Vernon Dresback, age 62, of Spokane, passed away November 4, 2021, of a heart attack. Mark was born on June 30, 1959, in Livingston, Montana. He attended school at Northwest Christian. He then attended Multnomah School of the Bible ...
Read More

The NWC Class of 2001 reunited for a casual two day event August 20-21 in Spokane, Washington. Using Facebook groups as a staging area to recruit and inform; the class opted for a adults only evening at Far West Brewery ...
Read More

In Memory of Angela Marie (Alexandrovich) Krc, Class of 1977

Angela Marie Krc, age 61, passed away at home in Wheaton, Illinois on Sunday, May 16, 2021, after a long illness. She was born on August 10, 1959 in Spokane, Washington to Andrew and Ida Alexandrovich. Angie loved the Lord, ...
Read More

In Memory of Michelle Beth (Modisett) West, Class of 1974

Michelle went to be with Jesus on the morning of October 1, 2021 at home surrounded by her family. She was 64 years old. Michelle was born to Cal and Rhoda Modisett in Long Beach, California in 1956. In 1974, ...
Read More

The NWCS Class of 2011 gathered together for their 10 year reunion at Manito Park on September 12th. It was such a great time of catching up! Their kids met too and played at the park. It was good to ...
Read More