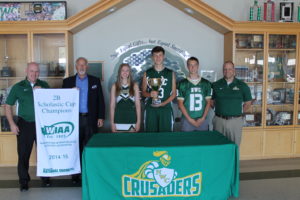 west Christian Schools recently won the WIAA-Washington Army National Guard Scholastic Cup 2B Championship for 2014-2015. The Scholastic Cup showcases schools that excelled in sportsmanship, academics and in competitive achievement for an entire year,” WIAA Executive Director Mike Colbrese said. “This award brings an entire school together as each student-participant contributed to capturing the Association’s highest honor.”

This year marks the second time in its history the school has won this award. They also took the Cup in 2006. NWC was the only Scholastic Cup Champion this year from the east side of the State of Washington among all six WIAA classifications.

Northwest Christian and St. George’s had one of the closest finishes in the 2B classification, but it was the Crusaders who narrowly passed the Dragons, 1,315-1,310 to claim their second Cup with four Academic State Championships – Fall Cheerleaders, Football, Boys’ Basketball, and Girls’ Golf. Other NWC highlights for 2014-2015 included two 2nd place state athletic finishes in Boys Cross Country and Girls Golf, and a 2nd place academic state finish in Girls Basketball.

The Scholastic Cup is the WIAA’s most prestigious annual school award. The Scholastic Cups are based on a point system that includes statewide finishes in academics, athletics, and sportsmanship. We are very proud of our athletes’ strong showing in all of these categories in 2014-2015.