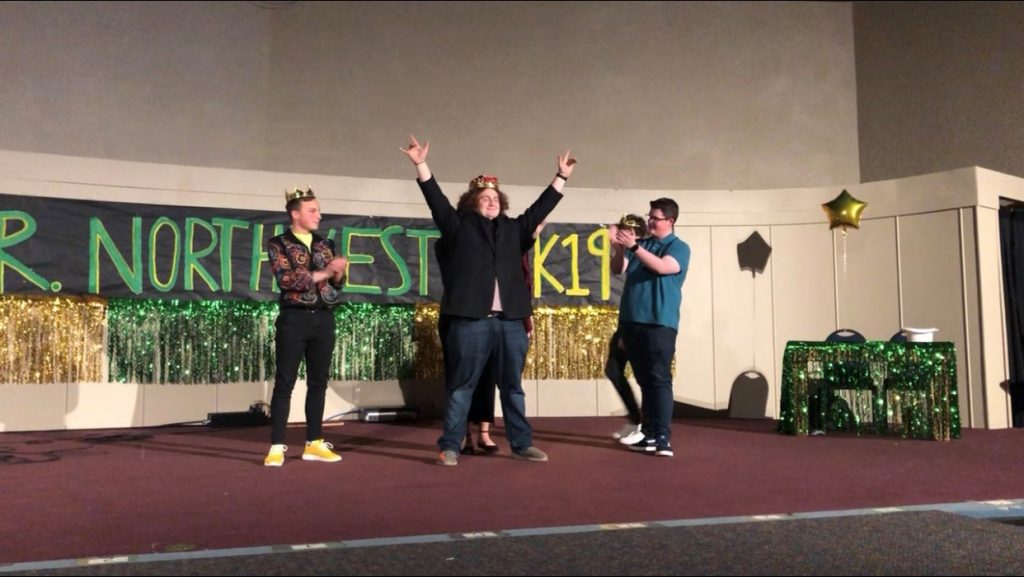 Last Tuesday, the Northwest Christian cheerleading squad hosted the Mr. Northwest event, a male comedy pageant that incorporates two students from all four grades of the high school and offers a coveted parking spot to the winner. This year, 8 young men were chosen across the four grades by their classes and were given a month to prepare an intro and main act.

From the freshman class, football quarterback Mike Bauman brought a hilarious skit about taste-testing ranch dressing, and aspiring singer Preston Fazio wooed the audience with his impressive Disney-song medley, including hit tracks from Aladdin, Frozen, and Toy Story. Voted into the competition by the sophomore class, the witty Alex Ramey had attendees doubled over with laughter from his stand-up comedy, joking on topics such as the unpredictable Spokane weather, Christmas shopping with his mom, and his reputation among the football players for cramping at the worst times. His classmate, Baz Carter, told the thrilling tale of a Sasquatch hunter who had finally caught the prey he had been searching for is whole life. Carter even brought in a friend, junior classman Tim Pebbles, dressed in a Sasquatch look-a-like costume to play the part.

In the junior class, first-time competitor Jonathan Story had audiences captivated with his comedic story about the truth behind the NWCS staff, which brought a mythological twist to the school and portrayed the incredible men and women who teach the students as the heroes they truly are. Also competing from the junior class was Colby Raver, who drew in audiences with his blockbuster-level intro video and the impressive cinematography that went into it. Raver’s main act, a dance routine performed to Rick Astley’s timeless Never Gonna Give You Up, was directed at NWC’s own Mr. Rick Biel, a history and social studies teacher notorious for his strict exterior and sarcastic humor who has been a recurring judge at the Mr. Northwest events for years.

The senior class once again brought in their finest. The senior’s nominations of Jacob Atkins and Zach Zwanzig exhilarated audience members with their acts. Zwanzig is no stranger to the Mr. Northwest event; he has competed in all four Mr. Northwest events since his freshman year and managed to secure the runner-up position last year as a junior. This year, he dazzled audiences with a modern parody of the classic Disney song, The Circle of Life, that lamented on the struggles and triumphs of social media in the lives of students today. Newcomer Jacob Atkins, on the other hand, took an approach that was true to his character, and created a “live” game show with the help of some other seniors, parodied off of Who Wants to Be a Millionaire and aptly titled Who Wants to Be a Ten Dollar-inaire. He listed sarcastic facts about the teachers and staff of NWCS as the answers to the questions, and eventually awarded fellow senior Jackson Eide with $10 at the end of the act for “winning” the show.

The event was emceed by Miriam Breithaupt, a junior, and Darius Carrozzo, a senior. The duo brought unique elements to the event that topped the whole night off, such as motivating the competitors with well-timed jokes and encouraging the progression of the show by repeating the phrase, “But, we gotta move on,” after many of the acts. The duo was proud to present Zach Zwanzig with the title of Mr. Northwest after a dramatic reveal at the end of the show, and crowned Colby Raver as his runner up. Overall, the event was a rousing success with both attendees and competitors alike, and significant funds were raised in aid of covering the cheer team’s yearly operating costs. A huge thank you goes out to everyone who attended this amazing event in support of the student body and the NWCS cheerleading squad.

Special thanks to Isabella Zwiesler and cheerleading coaches Jennifer Eide and Alison Russo for their dedication to the event, and to the entire cheer squad for always being ready to step up and help out whenever needed. Special thanks also go to Tyler Mathison, Jackson Eide, and Nick Ramey for running the sound booth, to Tanner Noller for filming the event, and to Mr. Biel and Mrs. Covey for assisting in judging the event. Mr. Northwest wouldn’t be same without any of you!