Wrestling to the Top 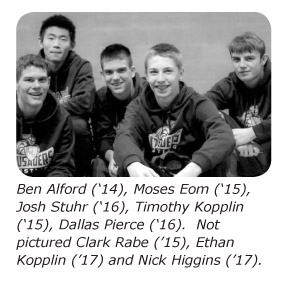 In spring of 2014 the wrestling program, in only its third year, made significant progress of a notable stature. The team, made up of eight wrestlers, welcomed Mr. Don Comi as assistant coach. Mr. Comi brought a new dimension to the team with his military back-ground, daily interactions as a teacher, and a deep love of the Lord. Mr. Mike Manuel and Marshall Hart (’12) added significantly to the team’s training. Dedicated athletes committed to two-a-day practices to concentrate on strength and conditioning.

Ben Alford (’15) became NWC’s first Regional Champion and placed third at the State level, where he pinned the State champion in an earlier match. Clark Rabe (’15) placed fourth at State.  In his first year as head coach, Pete Kopplin was extremely honored to be voted the District, Regional and State Coach of the Year by the Washington State Wrestling Coaches Association.

Our wrestlers participated in a camp in Pasco in July, and look forward to the 2014-2015 season in which four seniors (who were part of the inaugural team as middle schoolers) will lead the team. 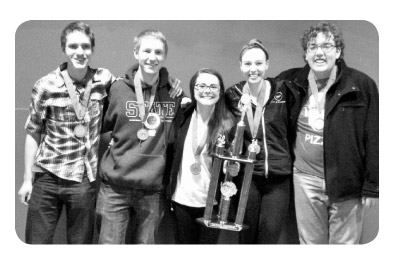 Knowledge Bowl is not a trivia contest, but tests students’ academic knowledge. The format for the state tournament includes rounds of written and oral testing. NWC had to win every round to advance. Coach Spuler shared how rewarding it was to see these students use their academic gifts in a very intense, competitive environment.

Rebecca Butler (’15) competed initially against 308 students through a grueling four months of assignments and tests to be selected for the Washington Aerospace Scholars (WAS) summer residency session. This program is designed to connect high school juniors with educational and career opportunities in science, technology, engineering, and mathematics through independent learning, hands-on interaction, professional guidance, and site-based tours.

Rebecca was selected to be one of 160 students to participate in a six-day experience held at Seattle’s Museum of Flight this past June. The session included teamwork to cooperatively plan a human mission to Mars with support from professional engineers/scientists, university students, and certificated educators. Rebecca is looking forward to studying electrical or mechanical engineering in college.

Rebecca is the third student from Northwest Christian Schools to be selected for the program. Sarah Gady (’12) and Luca Capobianchi (’13) were selected in previous years.

Service to country in the military is an ongoing legacy of the Alford family.  Phil and Lynn Alford take care of veterans at the Spokane VA Medical Center; Phil as a surgeon and Lynn as a nurse. Bonnie (‘10), and Ben (‘15), have also chosen to pursue military service. Bonnie Alford, after graduating from the U.S. Naval Academy in 2014, will serve aboard the USS Chosin, a guided missile cruiser. She will work to earn her combat warfare qualification as a Surface Warfare Officer.

Ben is currently applying for the U.S. Naval Academy, U.S. Military Academy at West Point, and U.S. Air Force Academy.
Regarding this pursuit he said: “I have to serve my country in some way. The academies provide a great education.” He then spoke about how his family has all chosen to serve in the military. Ben hopes to be a doctor, and looks to military service as a way of accomplishing this life goal.

Many graduates have chosen to serve God by serving and protecting the United States in our military. Recent graduates include Thomas Hughes (‘12)—Marines, Andrew House (‘14)—Coast Guard, and Megan Jasmer (’14)—Navy.  Please pray for these and for the Alfords… for Bonnie that God would use her aboard the USS Chosin, and for Ben that the Lord would open doors of great service to Himself in the military. 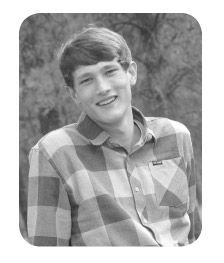 Cade Bowman (’14) earned the rank of Eagle Scout, the highest rank awarded in the Boy Scouts of America. Cade is a member of Boy Scout Troop 210. For his final project, he repaired and refinished indoor and outdoor wood furniture for Life Services of Spokane. “It is really fulfilling to work with my hands, and then for it to benefit a great organization makes it even a sweeter accomplishment.” 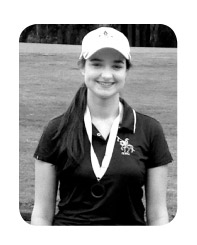 Sadie Garner (’14) is an accomplished golfer and qualified for the State tournament each of the four years of her high school career. She was known as one of the nicest and friendliest golfers within our district, always demonstrating a Christ-like character and a positive attitude, being friendly to all her fellow competitors.

During her junior year, she played her best golf and won the District title at Liberty Lake Golf Course. At State, the rain, wind and sloppy conditions got the best of her during the first round and knocked her out of contention for a medal; however, in round two she achieved the second best score of the day and moved up the leaderboard into the top 10.

During Sadie’s senior year, she became less interested in her score and more interested in the fellowship and encouragement of her competitors. As a result, Sadie’s scores worsened, but God had a better blessing waiting for her. At the State tournament, Sadie showed up with a very large 30 yard left-to-right slice to her golf swing. After some prayer she decided to play anyway. 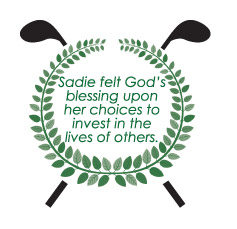 For two days, Sadie hit every shot with the large slice, made some fantastic putts, and scored the two lowest competitive rounds of her career. After Sadie claimed her third place state medal, she felt that the quality of her play was not worthy of her placement. Many of her competitors congratulated Sadie on her third place finish, wished her well and thanked her for her friendship. In this experience Sadie felt God’s favor and blessing upon her in her choice to put investing in the lives of others above her own personal golfing pursuits.