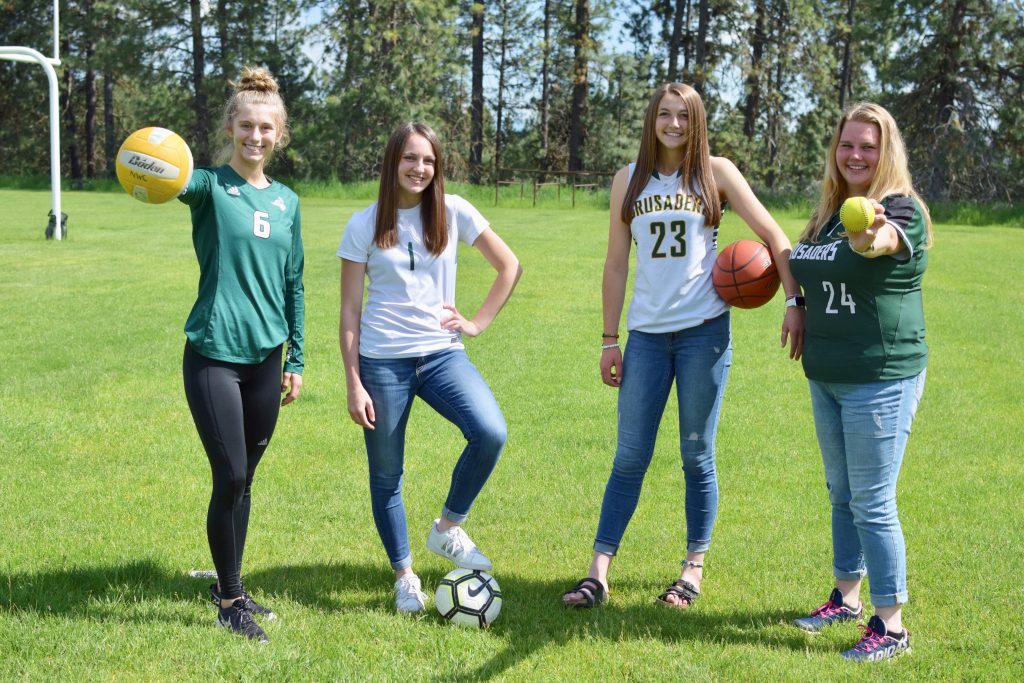 Northwest Christian Schools has a proud tradition of excellence academically and athletically, but this season four female athletes managed to accomplish something unique in High School athletics. NWCS has four different girls who were all selected as the NE2B League MVP’s in Soccer, Volleyball, Basketball, and Softball! Natalie Smith was League MVP in Soccer, Paige Dawson was Volleyball League MVP, Jordan Rabe was League MVP in Basketball, and Alison Shaler was selected as League MVP in Softball. Here is what their coaches have to say about these incredible athletes!

Even though junior Natalie Smith missed several games due to injuries, she ended up leading the team in goals scored, including a last-minute goal against the eventual State Champions, which gave us our very first program regulation win against St. George’s! She was one of the key reasons we won first place in league, which was also a program first. Natalie is a natural leader that is well respected for her work ethic and attitude. In a league full of talented soccer players, she stands out and her humility, kindness and competitiveness have shaped the entire program. We love Nat!

As league MVP and 2nd Team All-State this past season, senior Paige Dawson helped lead Crusader Volleyball to unprecedented success both in our team culture and our on-court accolades.  This season Paige amassed 61 service aces, 240 kills, and 278 digs. Paige leads by example with her hard-work, dedication & care for her teammates!  We are excited for Paige as she continues her college volleyball career at Seattle Pacific University this fall.

Jordan Rabe has been an integral part of the girls basketball team and their success the last four years.  In her Senior year, Jordan matured into a dominate all-around player capable of posting up against the best in our league and also being able to step out and drain a three.  Her double double season average of over 15 points and 10 rebounds a game was recognized by coaches league wide when she was named as the Northeast 2B North League MVP.  Jordan’s excellence extends off the court where she maintains a 4.0 GPA.  She will continue her success on and off the basketball court at Biola University.

Sophomore Alison Shaler pitched 127 innings and had 181 strikeouts. Her batting average was .552, and she had 4 homeruns during the season.  Alison is not only an incredible athlete, but she is also a great teammate and student.  She leads by example and has overcome various injuries in the past several years where she was unable to play.  She worked extremely hard in the off season to be ready and healthy for this year.  We absolutely love her dedication.  She is a quiet leader and is the heart of our team.  Her teammates adore her.  What an incredible accomplishment!

As a whole, these young ladies have served as leaders in our school and models of excellence in academics and athletics, and they have been examples of Christian service and character as they have loved and served their teams. NWCS is proud to highlight these four ladies as they highlight a year of athletic excellence at Northwest Christian Schools!